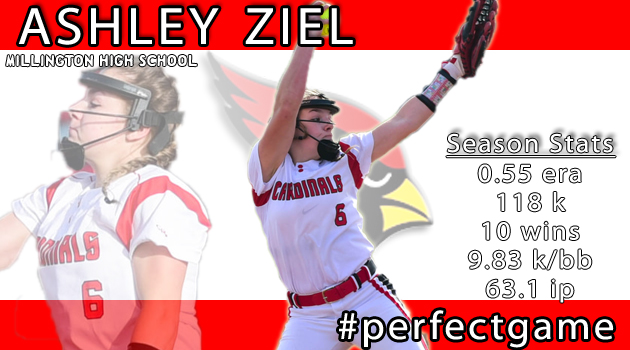 MILLINGTON – Millington junior right-hander Ashley Ziel threw a perfect game in the Cardinals’ game one victory over Hemlock on Tuesday. The Northwood University commit struck out 15 batters in the 1-0 victory, while also adding a double in three at-bats.

Ziel needed perfection as the Cardinal bats were held in check by the Huskie pitcher. Millington only had six hits, one of the hits provided the Cardinals’ only run as Trinity Fessler hit a leadoff home run to begin the second inning. The home run was Fessler’s fourth of the year.

Ziel was almost as good in the circle in game two leading her team to an 8-0 win. She struck out 11 batters, walking none, and allowing only three hits to pick up her 10th win of the year. With the back-to-back shutouts, Ziel lowered her ERA to a very stingy 0.55.

Ziel led the attack offensively as well going 3-4 at the plate with a double and a third-inning home run. Her third of the year.

Fessler and Dylan Holmes each added three hits. Holmes hit her third home run to lead off the third inning which was followed up by Ziel’s bomb.

Emma Dickie added two hits, while Leah Coleman, Brooke Finatri, Sherman, and Fallon Wilson all got in on the hit parade.

Millington (13-0, 4-0) will be off until Monday, May 3 when they travel to Standish to take on the Pathers in a Tri-Valley West clash. First pitch is scheduled for 4:00 p.m.