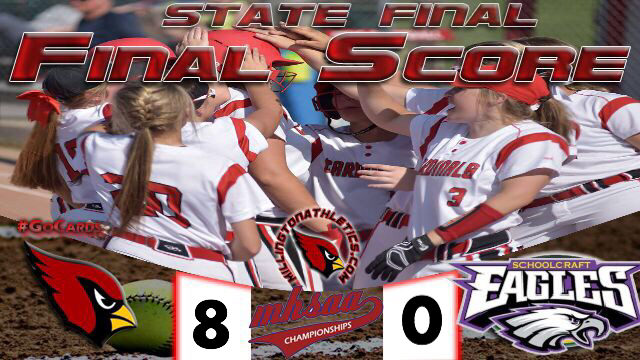 Millington won the toss and was the home team. After Gabbie Sherman struck out the side in the top of the first, Darrien Roberts took the first pitch of the game and drove the ball about 3/4 of the way up the left center field light tower to give Millington a 1-0 lead. The Cardinals would score four more runs in the bottom of the first and cruise the rest of the way.

Leah Denome continued her hot hitting ways in the playoffs. She led the team going 4-4 at the plate with a double and scored two runs. Denome finished the 2019 playoff run on a 19-24 run (.792) with three home runs, 10 RBIs, and 16 runs scored.

Sherman collected three hits and one RBI. Elizabeth Bees, Madi Hahn and Sydney Bishop each had two hits. Hahn collected two RBIs and Bishop one. Roberts, McKenna Slough, and Sabrina Gates each had one hit.

Sherman (24-2) threw a complete game striking out 12 batters and allowing only four hits. Sherman finished the season with a minuscule ERA of 0.79. She struck out 274 batters while only walking nine.

Millington finishes the season with a 38-2-1 record.