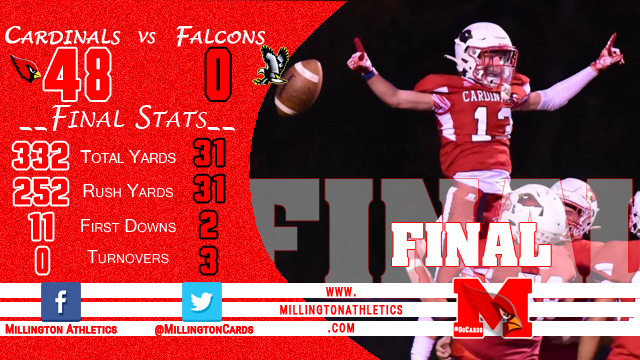 MILLINGTON – The Cardinals outgained Lakeville by over 300 yards as they shut out Lakeville in the opening round of the Michigan High School Athletic Association (MHSAA) playoffs. The win improves Millington’s record to 13-0 all-time versus the Falcons and is the third straight time Millington had shut the Falcons out at the Millington Cardinals Sports Complex.

Millington got on the board early on their first offensive play from scrimmage as Leyton Mays rumbled 24 yards for a touchdown after a shanked Lakeville punt. From there on out it was all Millington.

Issac Slough, Ryan Livingston, and Ian Crump all completed passes for the Cardinals and threw for one touchdown apiece. Slough’s touchdown was a 34 yard strike to Jerdannio Bailey. Livingston’s touchdown pass was to Drew Kihn from two yards out. Crump’s pass to Luke Sherman came from 16 yards to wrap up the scoring.

Millington (6-1) now moves onto the second round of the playoffs for the 19th time in school history. The game will be played in Millington and will be against the winner of the Mt. Morris/Pinconning game. The game date and time will be announced later in the weekend.