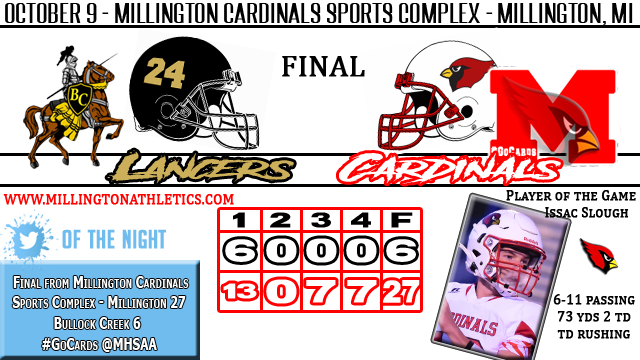 MILLINGTON – A Bullock Creek opening 91-yard kickoff return for a touchdown would be all the scoring the Lancers would do on Friday night as Millington pulled off their fourth straight win of the season by the final score of 27-6. The win secures the Cardinal’s 32nd consecutive winning season.

Millington was led by junior quarterback Issac Slough as he passed for 73 yards and two touchdowns. Slough also ran for 35 yards and one score.

Brendyn Callahan finished with two scores on the night. One came on a seven-yard scamper in the first quarter and the second on a 16-yard pass from Slough in the third quarter.

Drew Kihn scored Millington’s other touchdown on a 24-yard pass from Slough. Jonah Williams was a perfect 3-3 on extra points.

If Millington (4-0) can defeat Hemlock next week they will win their first conference championship since 2014. Hemlock will travel to Millington next Friday, October 16 for the Cardinals homecoming game. Kickoff is scheduled for 7 p.m.