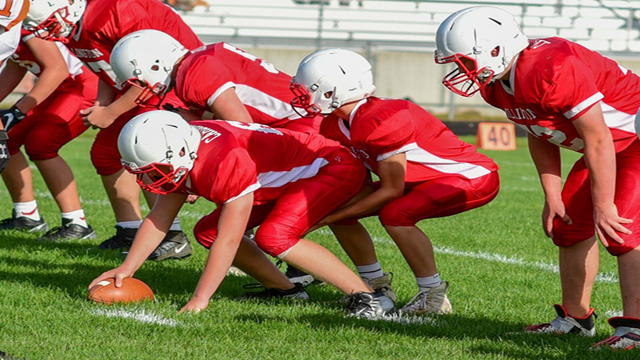 MILLINGTON – The freshmen offensive line of Dominic Novelli, Will Richards, Keith Fraiser, Garrett Wright, Max Wood, Ben Shreve, and Brennan Hunter were dominant opening holes for their backs as Millington ran to a 20-12 victory over Croswell-Lexington on Thursday night. Millington ran for a combined 307 yards on 46 attempts in the victory.

Aaron Gross led the way on the ground running for 130 yards on 14 attempts and scoring the Cardinals first two touchdowns. His first coming at the 2:49 mark of the first quarter from 20 yards out. Gross’ second touchdown of the game at the 5:53 mark of the second quarter from 19 yards.

Owen Butterfield ran for 121 yards on 25 carries and scored one touchdown. His touchdown came on 4th and 4 with no time on the clock as he dived into the endzone just before halftime. Luke Williams hit Hunter in the back of the endzone for the two-point conversion.

The Cardinals brought a 20-6 lead out of halftime and held tight the rest of the game only allowing one touchdown. Richards led the team defensively with seven tackles and a sack. Gross also had a sack and three tackles.

Millington (3-1) has a bye week ahead of them. They will next hit the gridiron on Thursday, October 3 when they travel to Alma. Kickoff is scheduled for 4:30 p.m. The Cardinals defeated the Panthers earlier in the season by the score of 20-8.