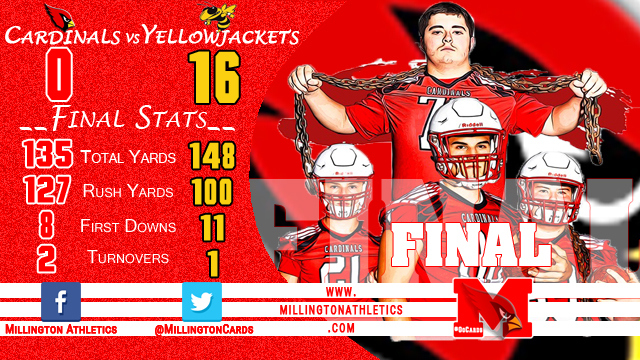 MILLINGTON – The Millington defense allowed two touchdowns and 106 yards of offense to Ithaca on the Yellowjackets first two possessions, and then proceeded to shut Ithaca out on only 42 yards of offense the rest of the way. The Ithaca defense was just as stout not allowing a Millington score as they beat the Cardinals 16-0.

Millington’s defense was led by Senior Zac Finatri’s five tackles and one pass breakup. Will Kirby intercepted an Ithaca pass.

The Cardinals will next take the field next Friday when they travel to Carrollton. The game is Service Game raising money for all local and American Heros. Kickoff is scheduled for 7:00 p.m.