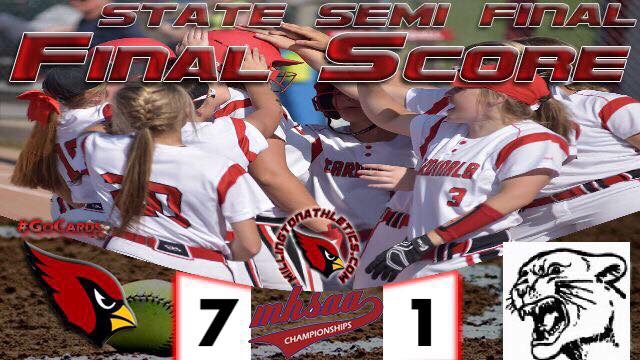 East Lansing – Leah Denome continued her hot hitting in the playoffs to help her Cardinal team to a 7-1 win over Standish and earn a repeat trip the the state finals. Denome was 3-4 with a home run and two RBIs while scoring three runs. Denome is now 15-20 (.750) with three home runs, two triples, and 10 RBIs in the six games of the 2019 playoffs. She has also scored 14 runs.

Madi Hahn added three hits in her four trips. Darrien Roberts, Gabbie Sherman, and Sydney Bishop each had two hits. Hannah Rabideau and McKenna Slough each had one hit.

Sherman was dominant on the mound allowing only one earned run on five hits and struck out nine batters.

Number one ranked Millington (37-2-1), will move to the state championship game tomorrow Saturday, June 14. They will face honorable mention ranked Schoolcraft (32-4) around 5:30 p.m. at Secchia Softball Stadium on the campus of Michigan State University. Spectator admission is $8 per person. Parking is $5 per vehicle.

The game will be broadcast on Classic Rock 92.1 – WIDL from Caro and also online at www.classicrocki92.com.