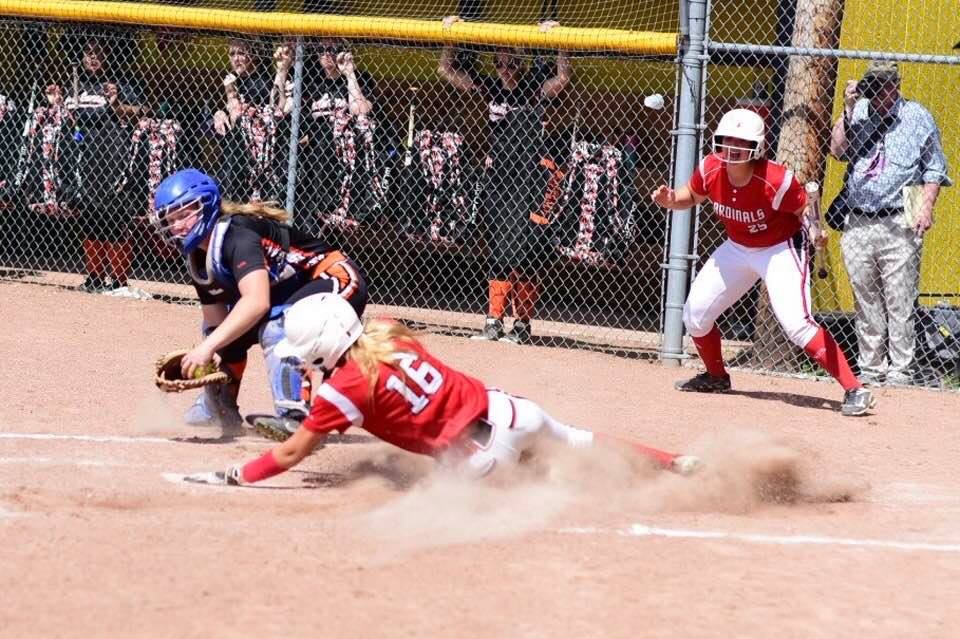 Game one of the day saw the number one ranked Cardinals down 3-0 to the number nine ranked Chesaning Indians going into the bottom of the sixth inning. With one out in the bottom of the sixth, Roberts hit a line drive down the right field line and ended up on third base with a triple. Denome drove the first pitch she saw over the center field fence to cut the Indians lead to 3-2.

After Gabbie Sherman threw an 11-pitch 1-2-3 top of the seventh, first baseman Madi Hahn took four straight balls from Chesaning pitcher Taylor Gross for a lead off walk. Freshman speedster Ashley Ziel replaced Hahn on base as senior McKenna Slough strolled to the plate. On the fourth pitch of the at-bat, Slough hit a long foul fly ball that was caught by Chesaning left-fielder Elizabeth Coon. Ziel tagged up on the play and easily advanced to second base as Coon’s throw sailed over the head of second baseman Skylas Wasler. Ziel never slowed down as she ran the extra 120 feet to tie the game at three.

After an error and bunt single, Sherman was facing the top of the Indian lineup with no outs in the top of the eighth inning. The all-state pitcher then induced two pop-outs and a soft liner to Hahn to escape the Chesaning threat.

With one out, Denome drew a base on ball. Sherman lined out to second. Now with two outs, Bishop was hit by a pitch on ball four. Hannah Rabideau took the second pitch she saw and hit a sharp line drive over the first baseman’s head to score Denome from second base and give Millington the walk-off 4-3 win in the regional semi-final game.

Sherman struck out 17 batters in her eight innings of work without walking anyone and allowing only one earned run.

Roberts led off the regional final versus Byron with her home run. Denome and Bishop each went yard in the fifth inning to put the game out of reach of Byron.

Sherman went all seven innings in game two striking out 11 batters and not allowing a walk.

Millington (35-2-1) will move to quarterfinal action on Tuesday, June 11 on the campus of
Saginaw Valley State University. They will face the Mariners of Marine City (21-5) at 3:00 p.m.