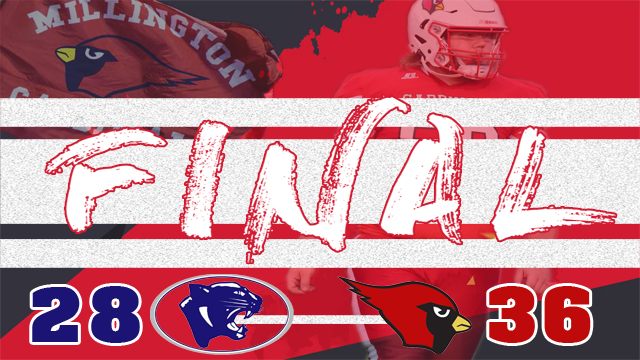 MILLINGTON – The Cardinal used a very efficient passing game to slip by Mt. Morris 36-28 in the district semi-final on Friday night.

Issac Slough completed 13 of 25 passes for 227 yards and three touchdowns on the evening. The junior had his best quarterback rating of the year with a 123.0. Will Kirby was his main air mate as he hauled in 10 of his 16 attempts for a career-best 153 yards and one touchdown. Senior Brendyn Callahan continued to have a hot hand as he scored two touchdowns and had 153 all-purpose yards. Callahan has now scored six touchdowns in Millington’s last 10 quarters of play.

Millington (7-1) moves on to play Montrose (7-1) in the district final next week. The game will be played at Hill-McCloy High School in Montrose. The date and time of the game will be annonced later in the weekend.