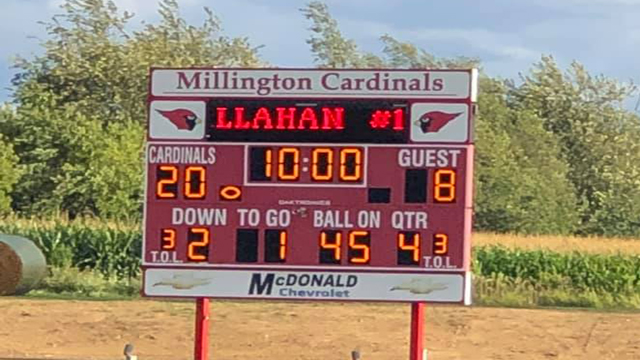 MILLINGTON – The Millington freshmen football team kicked off their season as six different people carried the football to ground out a 20-8 win over Alma on Wednesday afternoon.

Millington received the opening kickoff and took their time running left and right to finally get to pay dirt with 2:39 left in the first quarter as Owen Butterfield took a handoff from quarterback Luke Sherman and scored from four yards out. Ray Thorington completed the scoring drive as he went in for the two-point conversion.

The Cardinals forced Alma into a three and out to end the first quarter with an 8-0 lead. Millington then drove the field to the 30-yard line when Butterfield shook off two tacklers to score at the 8:04 mark. The two-point conversion failed to make the score 14-0. The two teams traded possessions as the half expired.

The teams once again traded possessions to begin the second half. Millington finally got on the scoreboard in the second-half as Butterfield scored his third touchdown of the night with 56.2 left in the quarter. The two-point conversion failed.

In desperation, Alma went to a full passing attack scoring a touchdown from 25 yards out with 7:38 left in the fourth quarter. A Millington fumble would give Alma another chance, but Sherman ended all Panther hopes as he stepped in front of the Alma quarterbacks pass for an interception to seal the game for Millington.

The Cardinals (1-0) will next take the field on Thursday, September 5 when they play host to Frankenmuth (0-1). Kickoff is scheduled for 5:00 p.m.