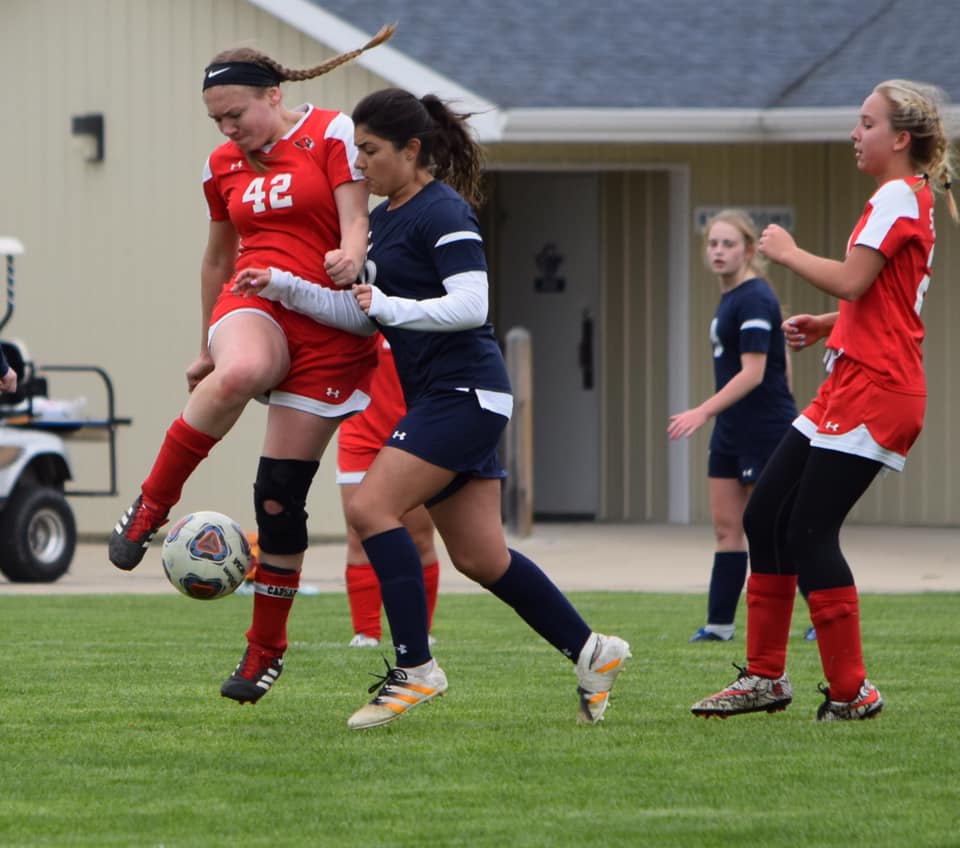 GLADWIN – The Millington girls varsity soccer team went 0-3 at the Gladwin Soccer Invitational on Saturday, May 11. The Cardinals (3-10-1) lost their opening game by a score of 5-0 to Tawas. In the second game of the day, Millington drew a 1-1 tie with Gladwin, before losing 4-3 in a penalty kick shootout. In the final game of the day, the Cardinals lost a tough battle to Sault Ste. Marie, falling 3-1.
“It was a tough day where we played some good teams,” Millington coach Andrew Selich said. “Tawas has 14 wins this season. Gladwin was undefeated coming into the weekend, and Sault Ste. Marie has an enrollment of over 700 students, so it was a challenging weekend.”
The second game of the day was the most exciting one for the Cardinals. In that game, Gladwin scored with 5:19 left on the clock in the first half to take a one-goal lead. After the break, both teams battled back and forth for several minutes before Millington senior Rebekah Williams tied the contest with a long goal with 13:41 left to play. The score would remain that way until the end of regulation.
For the shootout, each team had to choose five players to attempt penalty kicks. For Millington, Vanessa Selich, Emma Hoard, and Danielle Kociba each made their kicks, and after five attempts the score was tied 3-3. In the next round, Gladwin made its kick while the Millington attempt sailed wide right, giving the Flying G’s the win in dramatic fashion.
“That was an emotional game,” Coach Selich said. “We played our hearts out and came back from the halftime deficit. That was an exciting finish to the match. I have never been a part of a penalty kick shootout, and regardless of the outcome, I am sure that’s something the girls will never forget.”
In the final game of the day, Millington’s Sarah Simpson scored the Cardinals only goal in the loss to Sault Ste. Marie.