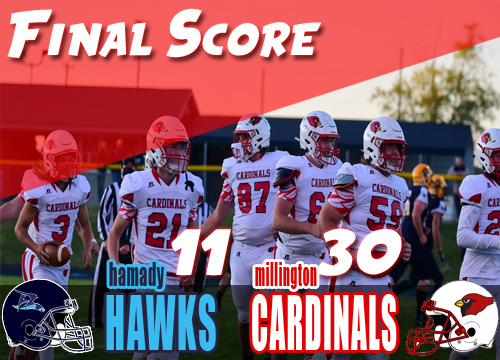 FLINT – Millington senior Brendyn Callahan sure does like the spotlight on Hamady’s home field. Last season his 50-yard interception return for a touchdown lifted Millington to victory over the Hawks. On Friday with his team down 11-8 entering the fourth quarter, Callahan responded in a big way.

At the 11:50 mark to open the final frame, Callahan took an end around 53 yards for his first score of the quarter. He scored two other times in the quarter and added a two-point conversion to help his team to victory. Callahan finished the night with 109 yards rushing on nine carries. He also added four tackles defensively.

Defensively, Jordan Rabideau led the team with nine tackles, including one sack. Kadyn LaChapelle had six tackles along with two sacks.

Millington (5-1) will enter the playoffs next week for the 17th consecutive season. Playoffs oppenents and date of game will be announced on Sunday.