MONTROSE – The Cardinals enter Friday’s district championship game for the 15th time in school history versus Montrose in an epic clash of two 7-1 teams.  Friday will be the fifth straight year Millington has played in the district championship and the 11th time in the last 12 years.  The very first year of the Michigan High School Athletic Association’s (MHSAA) expanded playoff system came in 1999 when the Cardinals claimed their first district crown versus, ironically, Montrose.

Millington entered the district championship game in 1999 on an eight-game winning streak.  After not having a week one game and losing in week two to North Branch (Millington has 18 straight wins over the Broncos since then), the Cardinals rattled off wins versus Birch Run, Caro, Garber, Frankenmuth, Bridgeport, Vassar, Hudson, and Croswell-Lexington in week one of the playoffs.  Montrose, the defending 1998 Class CC state champs, entered the week 9-1 with a stout defense that was only allowing just over six points per game and had thrown five shutouts on the year.  Millington was no slouch defensively either, only allowing about 10 points per contest.  The 1999 district championship did not see much defense played on either sideline.

Millington scorched Montrose with 500 yards of offense including 286 in the air by quarterback Mike Sampson in a 43-35 victory.  Sampson completed 17 of 29 passes with two touchdowns to Brandon Coleman and one each to Mark Colton and Ryan Woodward.  Sampson also ran for 48 yards and a touchdown.  Matt Jacque led the running game with 118 yards on 22 carries and a touchdown.  Josh Torrey was perfect on all four of his extra-point attempts.

“(Montrose) has been there and done it,” coach Tim Furno told the Tuscola County Advertiser at the time.  “This was a big, big win for these kids and this town.  They want to make things right and they are doing a great job.  They deserve every pat on the back they get.”

After the win, Millington would win the school’s second-ever regional championship the following week with a 34-14 win over Croswell-Lexington.  The Cardinals season would end at 10-2 in the Division 5 semi-finals with a 10-7 loss to Detroit Country Day at Atwood Stadium in Flint.

Millington’s main rival may be the team 14 miles to the west of town, but their “playoff” rival is most certainly Montrose.  Friday’s game will mark the ninth time these two schools have faced each other in the playoffs, the most of any team for either school.  Montrose holds a 5-3 record in playoff games against Millington including winning in the district championship each of the last two years.  In fact, this will be the third straight district championship between the two iconic Mid-Michigan football programs and sixth of all-time (1999, 2012, 2016, 2018, 2019).

The overall series between Millington and Montrose dates back to 1933.  The Cardinals won that first game in Montrose 7-0 under the direction of Cecil “The Swede” Swenson, an All-American football player from Central State Teachers College (now Central Michigan University).  The win that day would be the last time that Millington has won in Montrose.  The Rams hold a 7-5 overall record over the Cardinals with every one of their wins coming either in Montrose or on a neutral field.

Montrose is led by all-state quarterback Bobby Skinner.  The four-year starter holds the Montrose career touchdown record (61 coming into 2020), single-season record (25 in 2019), and single-game touchdown record (5).  His arm has not been a problem for the Cardinals in the last two years, but his legs are another concern.  Skinner ran for 515 yards and four touchdowns in 2019 with 125 of those yards and two touchdowns coming in the 2019 district championship game.  In the 2018 game, the now-senior quarterback ran for 60 yards and a touchdown.  In two games against Millington, Skinner has completed just 6 of 18 passes for 130 yards and zero touchdowns.

The Cardinal’s aerial attack was very potent in their win over Mt. Morris last Friday.  Quarterback Issac Slough, who is in the running for Saginaw News Player of the Week, had his best passing game of the year by completing 13 of 25 passes for 227 yards and three touchdowns.  Senior Will Kirby caught 10 of those passes for 153 yards and a score, while Brendyn Callahan caught two balls for 71 yards and two scores.  On the year, Slough has completed 49 of 100 passes for 767 yards with eight touchdowns and two interceptions for a quarterback rating of 102.  Callahan and Kirby each lead the team with 15 receptions.  Callahan has 268 yards receiving with four touchdowns, while Kirby has 217 yards with one score.

Limited tickets are available through the GoFan website in conjunction with the MHSAA for Friday’s game.  Directing your browser to the following link (https://gofan.co/app/events/150192) you will be able to purchase tickets.  The price of each ticket is $6.00 per ticket plus a $1.30 surcharge.  There is just a limited number of tickets available so get yours early.

Even though Friday’s playoff game at Bob Hayes Field in Montrose will be played with limited attendance, fans are still able to watch.  In conjunction with the National Federation of High Schools (NFHS) and the MHSAA, Friday’s game will be live-streamed on the NFHS Network’s website.  This is a subscription-based service.  Subscriptions can be purchased on an annual basis or a monthly basis through the NFHS Network when you click on the subscribe button.  The live stream can be viewed from any computer browser, apps for both Apple and Android devices, or on Apple TV, Roku, or Fire TV.  Each subscription will allow the user to not only view Millington events that are live-streamed but other high school events as well.  A portion of each subscription is donated back to Millington Athletics.  Kickoff is scheduled for 7:00 p.m.

If you do have a ticket for Friday’s game please see the map below for parking location and gate entrance location.  The visitor’s parking lot is on the southeast side of the stadium and can be accessed from Seymour Road (from Vienna Road turn north onto Seymour and left onto Allen Drive). 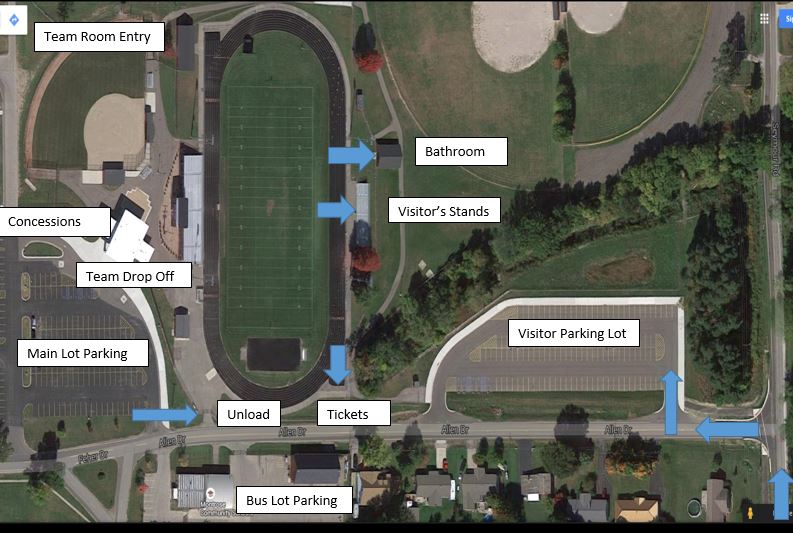