MILLINGTON – As the Millington Cardinals begin to kick off on of the strangest years of football in it’s 106 year history, when the 2020 gridders travel to Standish on Friday, September 18, Millington Athletics would like to take a look back at our first football team; the team of 1914.

The following is reprinted from the Friday, November 13, 1936, edition of the Tuscola County Advertiser.

Several members of the 1914 football team at Millington, the first of its kind in the high school, gathered Sunday at the Durant hotel in Flint for a reunion.  E.M. Conklin, Detroit, who was the first coach while he was superintendent of the school, acted as master of ceremonies.  Various members of the team told stories of their school life and football days.

Members of the team also had a reunion the fall before on November 8, 1935, on Alumni Day which took place during the Millington/Vassar football game.  The Red and White lost the game 7-0, but all the former players left happy as they were given baseballs by Bill Rogell the shortstop of the 1935 World Champion Detroit Tigers. 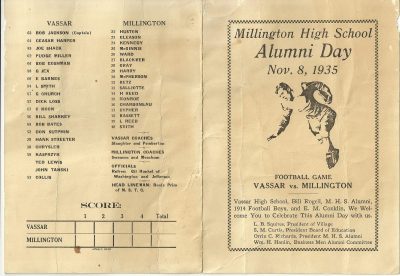 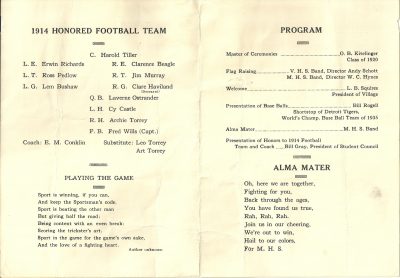