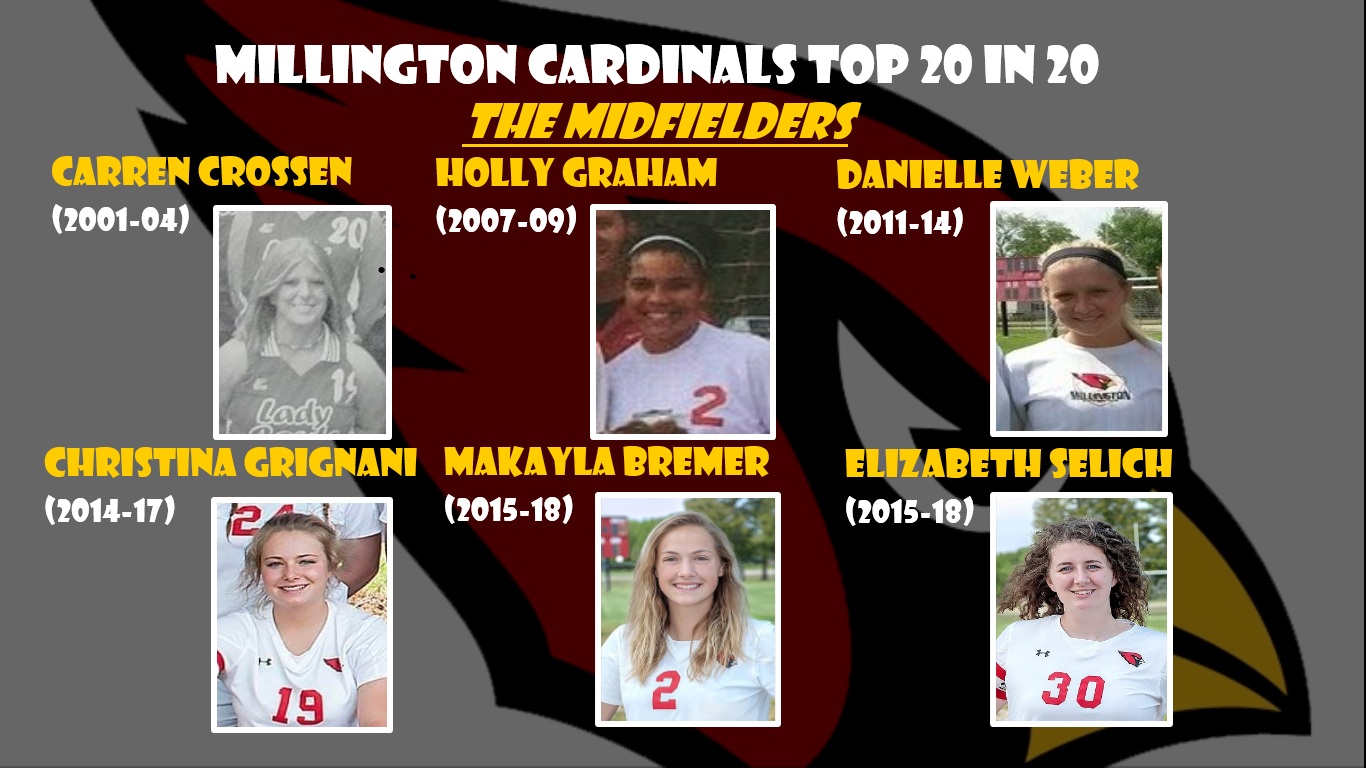 MILLINGTON – In celebration of the first twenty seasons of Millington girls varsity soccer, the current and previous coaches worked together to select the ‘Top 20 in 20’, or the top twenty players from the program’s first twenty seasons. Today, six members of the team are being announced, the top six Midfielders from the first twenty seasons. Those players are: Carren Crossen, Holly Graham, Danielle Weber, Christina Grignani, Makayla Bremer, and Elizabeth Selich.
Carren Crossen (2001-04) was a four-year starter at midfield from 2001-04 and capped off her career by being named Honorable Mention All-State in Division 3. Crossen often drew the responsibility of marking the opponent’s top offensive players, but she was also a force on the attacking side of the field as well.
“Carrie was one of the best defensive midfielders I ever coached,” former coach Dawn Meacham said. “I most remember Carrie taking charge of the ball and leading her teammates into play position. Carrie was an aggressive and strong player.”
Holly Graham (2006-09) was a three-year starter at Midfield, and garnered All-Conference honors each of those seasons, including a First Team All-Conference selection her senior season as well as All-Regional honors in 2009.
“Holly was the most technically proficient player I ever had,” former coach Bryan Bassett said. She could use both feet equally well, was a size mismatch for most midfielders and a speed mismatch for most defenders. Her ability to separate a defender from the ball she was carrying was her best asset. Holly set up countless goals for others and was a tough, fearless leader.”
Danielle Weber (2011-14) was a four-year starter for the Cardinals from 2011-14, spending her freshman season in goal before making the move to play center midfield from her sophomore through her senior season. Weber was a captain of the team, named the Most Valuable Player after her senior season, and was twice named to the All-Conference team in the Tri-Valley East Conference. According to her coach, Weber meant more to the team than just her stats.
“Danielle was the most valuable player I coached,” former coach Aaron Chamberlain said. “She was the heart and soul of the program, and she moved to wherever we needed her to play to be effective. She settled into the midfield most of her time. Dani was incredibly active, could control the ball, and create opportunities, while also contributing defensively on the background. She was masterful at playing the entire field.
Christina Grignani (2014-17) was a three-year starter at Midfield who would have been a four-year starter had her senior season not been cut short by a knee injury just three games into her senior season in 2017. In her three years for the Cardinals, she was a two-time All-Conference pick, including a First Team All-Conference selection in her sophomore season in 2015. In 55 career games, Grignani scored 23 goals and added 18 assists, totals which according to her coach would have been much higher if not for the knee that sidelined her for her senior season.
“Christina was such a unique talent,” Coach Andrew Selich said. “We moved her around a lot to take advantage of her abilities, and she was a such a good player. She played defense when needed, defensive center midfield when needed, and took most if not all our free kicks. Missing most of her senior season did nothing to take away from how great of a player she was.”
Makayla Bremer (2015-18) was a four-year starter at left Midfield and was twice named First-Team All-Conference. She was selected All-Area for four seasons and was an All-District pick for four years also. Bremer ended her career with 32 goals, 36 assists, was selected as an All-District choice for three seasons and was also named the team’s Midfielder of the Year for three straight seasons (2016-18). Bremer also played four games in goal for the Cardinals her senior season, making 36 saves and picking up one shutout victory along the way.
“Makayla was such a talented player,” Coach Andrew Selich. “And she was such a good all-around athlete. She played a few games her senior year in goal when we needed her to. She routinely would play defense against the dominant teams, and even kicked most of the Corner Kicks for us. She was fast and great with the ball.”
Elizabeth Selich (2015-18) was a four-year starter as an attacking Center Midfielder and a four-time First Team All-Conference selection, the only Millington Girls soccer player to earn that distinction. Selich finished her career with 32 goals and 77 assists (school record) in 78 career games and holds the record for most assists in a season (23 – 2017). She was named All-Area (Tuscola County Advertiser and the Saginaw News) all four seasons, was an All-District selection all four years and was named Honorable Mention All-State in Division 3 her junior year in 2017.
“Elizabeth was a strong player who had a knack for getting the ball and moving it to open players,” Coach Selich said. “Her height made her an easy target for us and a tough defensive assignment for other teams when she got near the goal. Elizabeth was strong, had a big leg and was an offensive force for us for four straight seasons.”
Tomorrow, Friday, June 5, the top six Forwards from the first twenty seasons of Millington girls varsity soccer will be announced. On Saturday, a special All-State feature will be released, focusing on the five All-State players from the programs first twenty seasons.