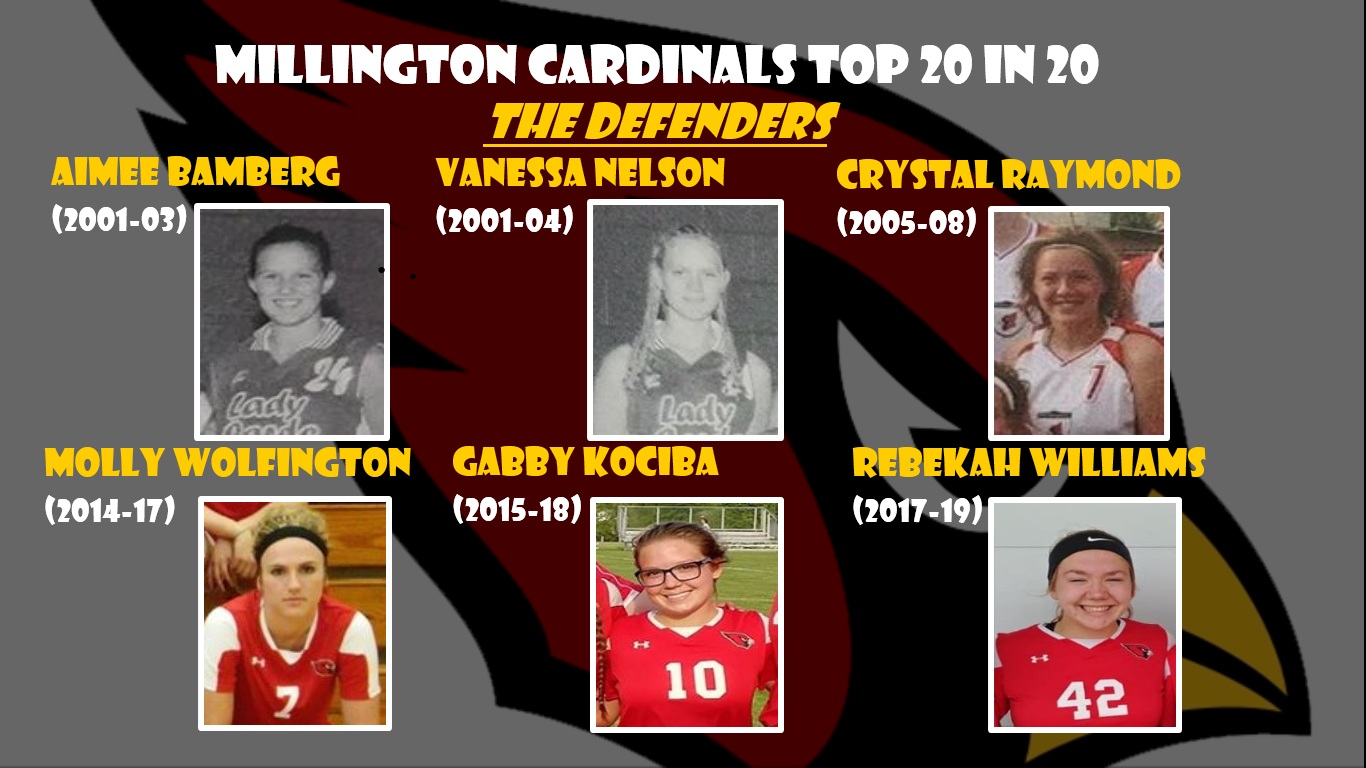 ‘Top 20 in 20’ – The Defenders: Bamberg, Nelson, Raymond, Wolfington, Kociba, Williams
MILLINGTON – In celebration of the first twenty seasons of Millington girls varsity soccer, the current and previous coaches worked together to select the ‘Top 20 in 20’, or the top twenty players from the program’s first twenty seasons. Today, six members of the team are being announced, the top six defensive players from the first twenty seasons. Those players are: Aimee Bamberg, Vanessa Nelson, Crystal Raymond, Molly Wolfington, Gabby Kociba, and Rebekah Williams.
Aimee Bamberg started her Millington soccer career as a goalkeeper, but with the emergence of teammate Amanda Weber in goal, Bamberg was able to transition to play a field position. For the 2002 and 2003 seasons, Bamberg played whatever position her team needed her to, but according to her coach, her best position was defense.
“Aimee was a player who understood the game of soccer,” former coach Dawn Meacham said. “Aimee was a team player. She played defense against the stronger teams. She was able to direct plays both on offense and defense. She was able to outmaneuver offensive players to clear the ball or make a run up the field. Aimee was a great all-around soccer player.”
Vanessa Nelson was a four-year starter on defense who routinely drew the assignment of covering the other team’s best offensive players. Nelson played from 2001-04 and capped off her senior season in 2004 by being selected Honorable Mention All-State.
“Vanessa loved to play soccer,” Meacham said. “Her energy and love for the game was contagious. Her teammates trusted her. When she got the ball, she would routinely clear it back to the other end of the field. She loved the game.”
Crystal Raymond was a two-time All-Conference selection, was named to the All-District team and was a Dream Team selection her senior year in 2008. Raymond was a four-year starter from 2005-08 and helped lead her 2008 team to the District championship game, where they lost to top-ranked Flint Powers.
“Speaking of toughness, Crystal was as tough a defender as I’ve seen,” former coach Bryan Bassett said. “She didn’t have blinding speed, but her knowledge of the game and the ability to push players toward help was her strength. Crystal was the shut-down defender on her team.”
Molly Wolfington was a four-year member of the Cardinals soccer team (2014-17) and a three-year starter at the Center Back position, playing in a total of 73 games over four seasons. Wolfington was twice named All-Conference and was selected as the team’s Defensive Player of the year two times (2015, 2017).
“Molly was the most consistent Center Back that I have coached,” Coach Selich said. “She routinely played 80 minutes every game, never missed a game in three years, and always seemed to make the right decision on what to do with the ball. Always calm, always composed, Molly’s calm demeanor is exactly what a coach looks for in a Center Back. Fantastic defensive player.”
Gabby Kociba spent her freshman season as the team’s goalkeeper. That year, she compiled a 7-7 record while making 208 saves in net for the Cardinals. Kociba spent her next three seasons playing outside back, scored four goals in her career. and was twice named to the All-Conference team for her efforts. Gabby was also awarded the Coaches Award for her team-first attitude her senior season.
“Gabby was the consummate team player,” Coach Selich said. “She started in goal as a freshman, spent two years playing outside back full-time, then moved around to wherever we needed her to be in her senior season. She was tough, played aggressive, was a lockdown defender and was good with the ball.”
Rebekah Williams was a three-year starter for the Cardinals (2017-19), playing Defensive Midfield and Defense, and finished her career with 11 goals and 13 assists. Williams was a three-time All-Conference honoree, including garnering First Team honors in 2019, as well as All-District and All-Area twice. She was named the team’s Defensive Player of the Year her senior season and was awarded the Coaches Award for her great attitude and team-first mentality.
“Rebekah played with all heart,” Coach Selich said. “She started out as a Center Back on defense then spent two seasons as our Defensive Center Mid. She was our team leader her senior season and played with a lot of passion and enthusiasm. Rebekah is easily the hardest working kid I have ever coached, and she was a great player.”
Tomorrow, Thursday, June 4, the top six Midfielders from the first twenty seasons of Millington girls varsity soccer will be announced, followed by the top six all-time Forwards on Friday. On Saturday, a special All-State feature will be released, focusing on the five All-State players from the program’s first twenty seasons.