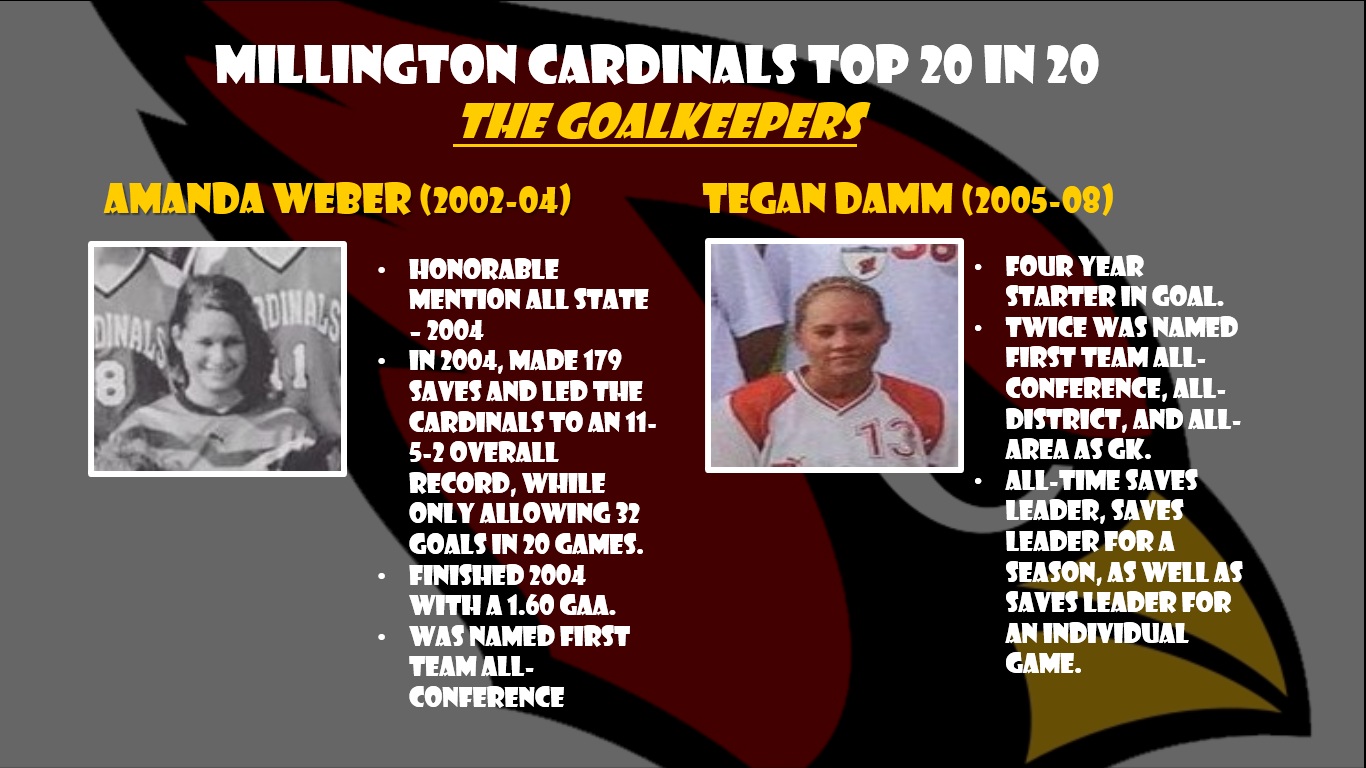 MILLINGTON – In celebration of the first twenty seasons of Millington girls varsity soccer, the current and previous coaches worked together to select the ‘Top 20 in 20’, or the top twenty players from the program’s first twenty seasons. Today, the first members of the team are being announced, the top two goalkeepers in the first twenty seasons: Amanda Weber and Tegan Damm.
Amanda Weber was the starting goalkeeper for two seasons, in 2003 and 2004. Weber finished those two seasons with 18 wins, while collecting eight shutouts. In her senior season in 2004, Weber made 179 saves while allowing just 32 goals in 20 games. She ended the season with an overall record of 11-5-2 and a goals against average (GAA) of just 1.60. Weber was named Honorable Mention All-State at the conclusion of the season (the only GK in Millington girls soccer history to earn that distinction), as well as All-Conference and All-District honors.
“Weber is the most athletic girls player I ever coached,” former coach Bryan Bassett said. “She was tall, fast, and had fantastic instincts. Combine that with her killer mentality and her hatred of losing, and she was one tough keeper.”
Tegan Damm was a four-year starter in goal (2005-08) for the Cardinals, which is impressive considering at the time the program still had a junior varsity team. In those four years, Damm amassed 27 wins (school record) with 16 career shutouts (school record). Damm is program’s all-time leader in career saves (774), saves in a season, as well as saves in a game. She was named first team all-conference for two seasons (2007, 08), while also being named All-District and All-Area in those two seasons as well.
“Tegan was the only four-year starter I ever had as a keeper,” Bassett said. “Very athletic, but also more of a technical keeper. She was good at setting up her defense to get the shot she wanted and always seemed to be in the right position to make the saves. Tegan worked very hard in the off-season, and it paid off with the team making a good postseason run her senior season.”
Tomorrow, Tuesday, June 2, the top six defensive players from the first twenty seasons of Millington girls varsity soccer will be announced, followed by the top six all-time midfielders on Wednesday and the top six all-time forwards on Thursday.